Disposable Barbecue – Are They Really Worth It? The sun is shining, friends are coming over, and there?s a rumble in your stomach. It all adds up to perfect timing for some al fresco dining and we think you?ll agree, nothing can quite beat a barbecue or, in this case, a disposable barbecue.

There?s just one problem ? you don?t actually have a barbecue. Even worse, you might have never used a barbecue before. Now, you could head out and spend a small fortune on the latest unit with all the bells and whistles included. However, that?s more of a commitment than you?re likely willing to make. You don?t even know if you?ll enjoy the cooking part even if you?re confident in the eating.

You could instead skip out on the expense without missing out on any of the flavour and plump for a disposable barbecue. You never know ? you might like it enough to invest in something more substantial. If not, you?ve lost nothing as you still get full use out of the barbecue itself and a full stomach at the end of the day.

What is a Disposable Barbecue?

As the name suggests, a disposable barbecue is a one-time piece of equipment that stands every chance of outperforming the oven in your kitchen for burgers, sausages and just about any other meat product.

They are commonly confused with portable barbecues, but the differences are not exactly subtle. For starters, you?ll pay quite a bit more for a portable barbecue. On the plus side, you?ll get to use it more than once, and the results are often a bit better. However, when we?re all about cutting costs and flexibility, the disposable barbecue still has a chance to win the day ? especially when the clock is ticking on your guests? arrival while you?ve been reading this article.

When it all comes down to it, a disposable barbecue is a combination of aluminium and charcoal, made to be lightweight, cheap and ready to cook at a moment?s notice. The best part is undoubtedly that they are designed to be thrown away after use. Ask a seasoned al fresco griller what they hate the most about their barbecue, and a good few of them will say the clean-up process afterwards. You can get a disposable barbecue as dirty as you like ? it?s going in the bin when you?re done anyway!

Aside from being pressured into making the wrong decision, there is one great reason to opt for a disposable barbecue as cook time draws closer. There?s no setup, no accessories outside of your spatula and nothing else required. Everything you need comes in the box.

As well as the aluminium tray and the charcoal, you?ll also receive a lighting sheet ? although you?ll usually need to find a source of ignition yourself. Matches, lighters and a safety gas lighter all get the job done. Fingers crossed, that lighting sheet should be all it takes to get the barbecue going.

When the coals turn grey, which typically takes around fifteen minutes, you?re ready to start cooking. What you cook and how well done you make it is up to you. The good news is that a disposable barbecue will achieve similar results to its more permanent cousins. The flavour comes from fat leaving the meat, hitting the charcoal and releasing smoke, and that process remains the same here.

You can expect around 90 minutes of cooking time from a disposable barbecue. Naturally, you cannot relight it once it goes out, so make sure you?ve planned ahead to make full use of its active life. Sadly, there?s no going back later after a few more beers for another round.

As with any barbecue equipment, it is crucial to ensure that the barbie has gone out completely when you?re finished. The same tried and tested techniques that apply to any charcoal-powered barbecue ring true here, and you should use your choice of sand or water to block off the oxygen and ensure everything has been fully extinguished. After all, you probably don?t want an impromptu bonfire in your wheelie bin.

Our Pick for the Best Disposable Barbecue

A disposable barbecue is hardly a fantastical feat of engineering, and they tend to be much of a muchness. Assuming you don?t live somewhere with no regard for safety standards and you buy from a reputable retailer, it is hard to go wrong.

With that said, if we were put on the spot and had to pick just one disposable barbecue to recommend, we?d go with the AMOS Instant Barbecue. It?s a good size, a great price and comes from a reputable name. Crucially, if you?re in a pinch, you can usually get your hands on it quickly thanks to Prime delivery. 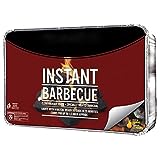 Just as outlined in a general fashion earlier in the feature, this disposable barbecue is ready to cook in 20 minutes and will keep on cooking away for an hour and a half after you light it. It?s big enough to feed a family or small gathering without any concerns, and if you like it, you can even grab a two-pack of the same model for a bigger bargain and one to keep for another time. Of course, there?s nothing to stop you lighting both of them side by side at larger gatherings too. Organise a Garage on a Budget – Our Top Tips and Ideas The Perfect Lawn – 10 Tips to Make Your Grass a Centrepiece Garage Door Maintenance – Tips to Potentially Save a Fortune